Plan a financial future for your family.

Checking in with the markets—priced for perfection

I included one simple paragraph at the end of last month’s newsletter. “By month’s end, a modest bout of volatility re-entered the landscape, as investors took note of an upward creep in Treasury bond yields. It’s a reminder that stocks don’t rise in a straight line.”

While tranquil periods won’t last forever, I will never try to time a peak or trough in the market. Corrections can come suddenly, surprising the most astute market observers.

There is no one out there that can consistently call the tops and bottoms in the market, period.

A sudden downdraft in shares can be unsettling for some. I understand that. I’ve heard a correction described as being blindfolded on a rollercoaster. You know there’s a bottom, you just can’t see it.

Early February’s slide saw the S&P 500 Index lose just over 10% in value–an official correction–in just nine trading days. That’s right–nine trading days from an all-time high to a 10% decline which, according to LPL Research, was the quickest on record.

It created an ideal environment for stocks, i.e., low volatility and upward momentum.

However, when you’re priced for perfection, or something near perfection, any disappointments are likely to be amplified.

What sparked the sell-off? Yields on the 10-year Treasury were rising, which began to create a stiffer headwind for stocks.

But what likely would just have been a mild downturn snowballed. As we entered February, speculators who had piled into products designed to take advantage of low volatility were suddenly forced to jump ship, which exacerbated selling pressure in stocks.

Further, computer program trading kicked in, adding to the turbulence.

Let me take a moment to repeat a familiar refrain. Making investment decisions during times of emotional duress is rarely profitable. For example we had record inflows into stocks funds right before the market top and record outflows right after. 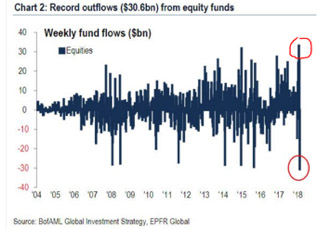 Walt Bettinger, CEO of Charles Schwab, summed it up well in a timely interview at the end of last year that was published in Fortune and picked up by Money.

We’ve experienced periods that might be described as modestly “painful” since 2010. Admittedly, the 2001 and 2008 bear markets were difficult, but even investors that were fully invested in stocks–something I rarely recommend–were made whole and then some if they didn’t sell out at or near the bottom. What makes these periods be less painful is periodically rebalancing the portfolio; taking gains in risky assets that have performed well and placing them into less risky assets with more stable returns.

The early February downturn can be pinned on technical factors and not economic distress, in my view. The profit and economic outlook is upbeat, which I believe cushioned the downturn.

Interest rates, however, may tick higher. It’s something that could create headwinds in the nearer term, even as profit growth this year is forecast to accelerate (Thomson Reuters). Volatility is likely to return to normal following last year’s anomaly but currently economic data looks strong.

Is Now the Time to Convert your IRA into a Roth?

There are many different ways you can shelter your savings from taxes. It is a powerful incentive for us to save for retirement.

Options give us choices, but choices can confuse as options proliferate.

In the name of simplicity, I’ll avoid what is sometimes called the “alphabet soup” of retirement accounts. Instead, let’s spend a moment reviewing one advantageous item in the still-cumbersome tax code: a Roth Conversion.

Before we head in this direction, a short explanation of the key differences between a traditional individual retirement account–popularly called an IRA–and a Roth IRA is in order.

Let me emphasize–this is simply a high-level review. Many other rules govern the nuances of these accounts, including income limits on contributions and possible penalties for early withdrawal.

If you have any additional questions, please email us or give us a call. Or, feel free to consult with your tax advisor with any specific tax questions.

Your money for nothing

The prospect of taking tax-free withdrawals is quite enticing. It’s probably the biggest advantage of Roth. But those who originally opened a traditional IRA aren’t shutout, as the IRS allows individuals to convert their traditional IRA into a Roth IRA.

But is this a good idea? Well, for many, it is something that you may want to carefully consider.

The concept of a Roth Conversion is simple. If you decide to convert $100,000 in your traditional IRA, that $100,000 is added to income and you’ll pay income taxes on it at your marginal rate.

Following passage of the Tax Cut and Jobs Act late last year–and this is important–lower tax rates, which take effect this year will likely lower the tax bite for those who convert to a Roth.

Put another way, converting to a Roth just became a little more attractive for many folks. Further, prospects that the federal deficit will rise in the coming years may bring higher tax rates–higher tax rates that could hit you when you begin withdrawing funds from your IRA.

The possibility of higher rates isn’t a given, but it adds to the lure of a Roth now.

Once conversion occurs, you are the proud owner of a Roth IRA. Gains and income are sheltered, and withdrawals at retirement are exempt from federal income tax.

What prevents folks from taking advantage of the benefits of converting to a Roth? The most obvious reason–the up-front tax bite.

If you convert, it’s best to avoid paying the taxes from the IRA, because you’ll reduce the capital that’s sheltered from taxes. And, if you’re younger than 59½, you’ll be facing the 10% early withdrawal penalty for the amount taken out of the IRA and used to satisfy the tax burden. Instead, you would want to pay Uncle Sam with money held outside your IRA.

You can also take smaller bites. You may decide to convert a traditional IRA over several years, spreading out the cost. Or, convert just enough to avoid the prospect of going into a higher bracket.

While the up-front tax bite is probably the biggest deterrent for many, there is another reason you may want to avoid a conversion. Do you have government-subsidized benefits, such as health insurance, which might disappear if a Roth conversion raised your income? It’s an important consideration.

Under the recently passed tax bill, you can no longer ‘recharacterize’ a Roth back into a traditional IRA if the conversion occurs in 2018 or later (IRS: IRA FAQS–Recharacterization of IRA Contributions).

The ability to recharacterize disappeared with tax reform. There is no going back.

Finally, tax reform and lower income tax rates create an interesting twist. If you converted in 2017, the IRS gives you until October 15, 2018 to reverse that conversion (IRS: IRA FAQS–Recharacterization of IRA Contributions).

You will pay taxes on income at 2017’s higher rate. If you recharacterize and convert back to a Roth in 2018, that amount is taxed at a lower rate.

However, much will depend on when the 2017 conversion was completed, since market gains may negate any benefits from implementing this maneuver.

To convert or not to convert

• Do you think you’ll need to take minimum distributions when you reach 70½?
• Will you move to a high-tax state or a low-tax state?
• What might your marginal tax bracket be at retirement?

You may not have definitive answers to these questions. But they can be used as a guide. As I have repeatedly stressed in my newsletters, you are not in this alone.

If a Roth conversion is a path you may want to consider, let’s talk. Together, we can explore whether a conversion is right for you.

I hope you’ve found this review to be educational and helpful. If you have any concerns or questions, let’s talk. That’s what we’re here for.

As always, we’re honored and humbled that you have given us the opportunity to serve as your financial advisor.

Securities offered through KMS Investments, Inc. Member FINRA & SIPC. Investment advisory services offered through KMS Advisors, LP. This material was prepared by Horsesmouth LLC and does not necessarily represent the views of the KMS Financial or their affiliates. All information is believed to be from reliable sources; however, we make no representation as to its completeness or accuracy. Opinions expressed are subject to change without notice and are not intended as investment advice or to predict future performance.